Menu ⇓
While trying to learn embedded rust, I ran up against issues connecting my black pill STM32F103 boards to the ST-Link v2. The solution is simple but badly documented, so here it is with nice illustrations.

The ST-Link v2 can be used to connect to development boards either under external power or power from the ST-Link. However, even when the ST-Link is used to provide power, and successfully powers the target from it’s VDD pin (pin 19), it is always necessary to connect ST-Link’s VAPP (pins 1 or 2) to the target 3.3v rail, as the ST-Link determines the target programming voltage from this pin. Not doing so will lead to random errors, some of which are documented below. 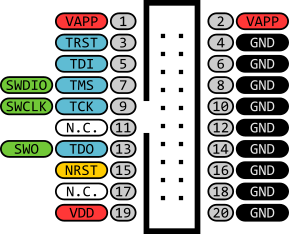 To use a ST-Link to programme a blue/black pill (BP) under external power, connect it like this:

The illustrations show a blue pill because that’s what fritzing had in its part library. The connections are essentially the same for the black pill. 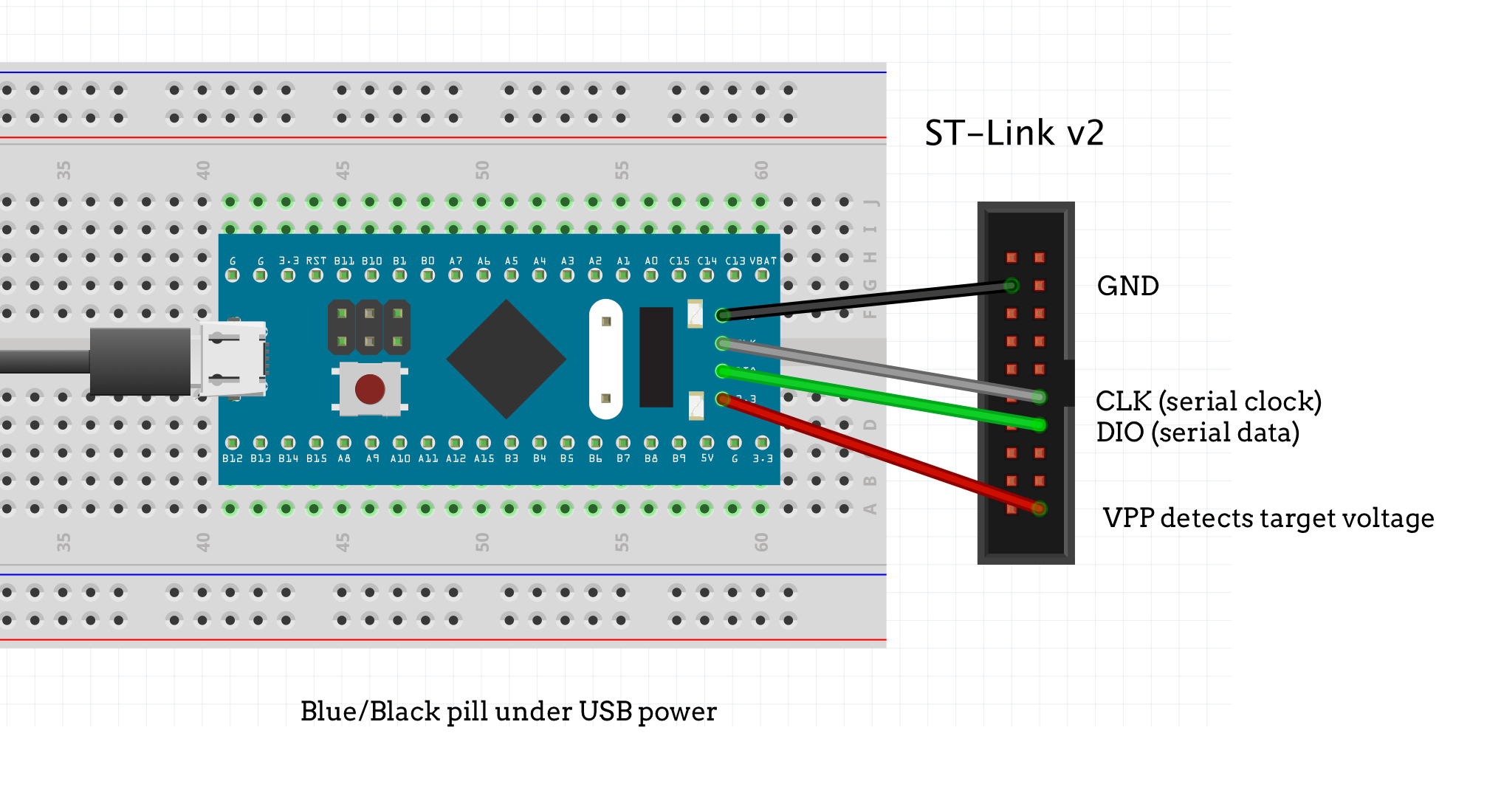 To use a ST-Link to power and programme a blue/black pill at the same time, connect it as follows: 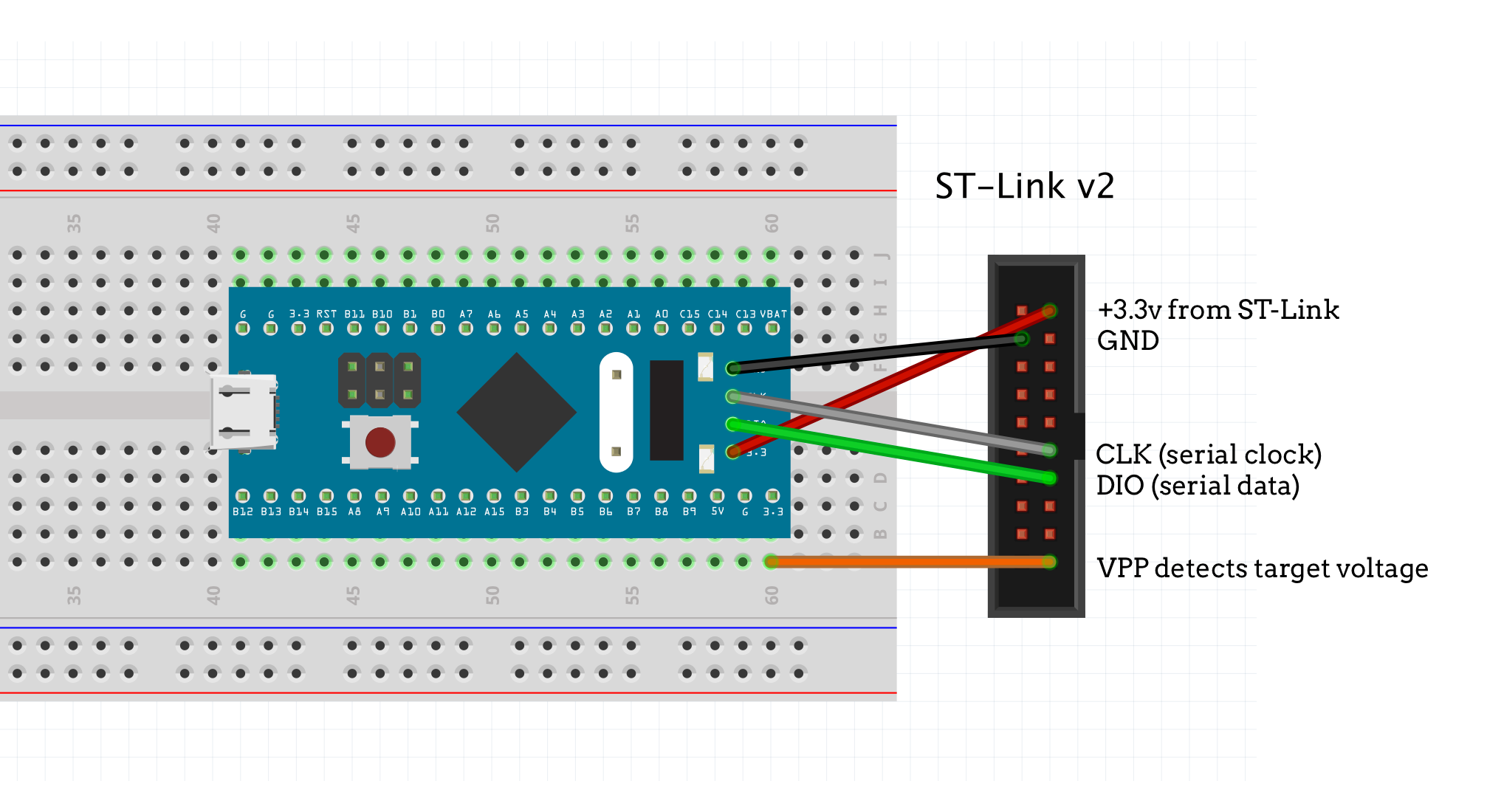 For what it’s worth, when programmed like this, the BOOT0 and BOOT1 headers don’t seem to do anything. I can successfully flash binaries to the board with the headers in either position, or left off completely.

If you leave the VAPP pin disconnected, you’re likely to see various inconsistent errors. Here’s a few of the ones I was treated to:

Here, openocd looks like it can connect, but complains about the Target voltage being 1.5v rather than the 3.3v we expect. This is a clear warning sign that something is not working!

If the noise voltage measured on an unconnected VPP happens to be low enough, openocd will complain:

If you try to use cargo flash to flash a binary to the BP, you’ll likely cycle through a colourful array of different errors, each as undocumented as the last:

They all look more or less like this, but the Command can fail with statuses like SwdDpFault and JtagGetIdcodeError. If you try to use probe-rs-cli, you might sometimes get SwdApError, SwdDpParityError, or what looks like a partial success, with Available Access Ports: followed by nothing.

Attempting to use stmduino, st-flash, pyocd or various other software will probably produce similar errors.

While trying to follow this rust STM32 programming guide (wayback machine as the original site is having TLS issues at the time of writing) I ran up against weird, inconsistent connection errors.

I tried researching the error messages I was getting but found nothing other than the suggestion that the STM32 was probably a Chinese counterfeit, and that was causing the problems. I initally gave up, but then decided to have another crack at the issue. Noticing that openocd was reporting low target voltages, I eventually realised that VAPP doesn’t provide power but rather detects it.