Menu ⇓
When consistently failing to synchronise orbit and dock got boring, I started installing mods and building whatever nonsense their parts inspired. KAS confused me a little at first (what use is a grappling hook on a rocket?), but adding in Hooligan Labs’ Airships, B9 Aerospace’s cargo holds and Firespitter’s propulsion parts results in some really fun craft.

Despite airship envelopes being surprisingly difficult to explode, the initial learning curve for airship design has been similar in difficulty to the breaking-in process for rockets and spaceplanes, hampered a little by the fact that most of the HL Airships example craft can’t be examined without some unspecified mod(s? who knows). Here are some tips to get you started building zeppelins. 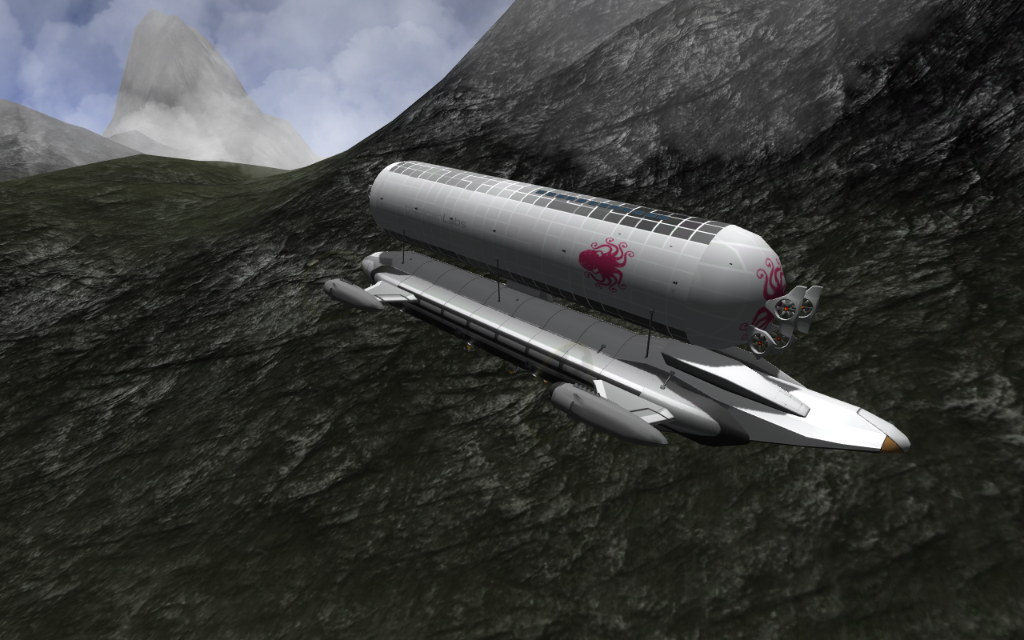 Always have centre of mass, centre of lift and centre of thrust visible

Successful airship design relies on these three being aligned with rather exacting precision, so without them you Will Not Go To Space Today. During extensive testing I began to wish the SPH view remembered their state so they don’t have to be turned on again after every test — if anyone at Squad is reading, consider that a feature request!

Centres of lift and thrust act upon your ship, the centre of mass is the origin

Your ship should be symmetrical, with COM, COT and COL all on the same plane right down the middle, allowing you to imagine your ship as a 2D plate fixed to a wall by its COM and able to rotate around it. The COL and COT are points on the plane where force is applied along the axis of their arrows, and in the same direction for lift but opposite for thrust.

Because the two vectors act upon different axis they can be considered separately. The centre of lift should always be exactly horizontally aligned with the COM — imagine the COM having an arrow in the opposite direction, representing gravity. The two arrows should cancel each other out and be aligned, or you’re going to have a wonky airship: 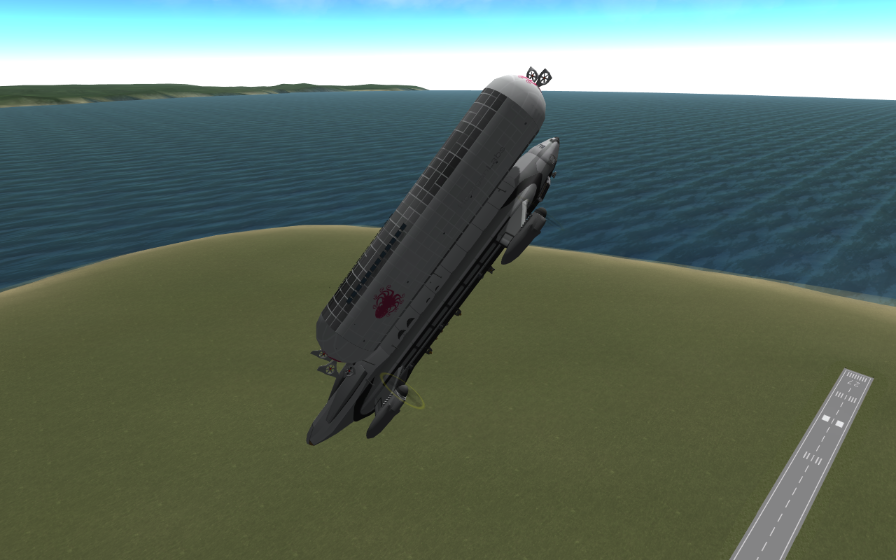 This airship is trying to go to space due to a misaligned centre of lift.

The thrust vector acts horizontally and should be perfectly vertically aligned with the COM, otherwise everything will look fine during launch, but as soon as you throttle up you’re going to be looping the loop, and airships are not very good at that: 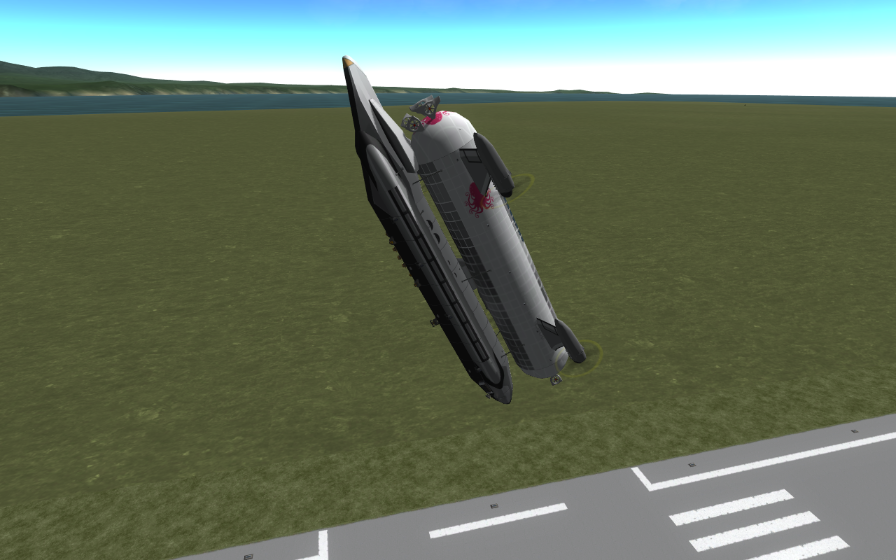 This airship was fine whilst lifting off, but when throttled up decided it wanted to land nose-first at great speed.

Seeing these two effects if might be tempting to say “surely the COL and COT can be misaligned from the COM if their effects cancel each other out?” Well yeah, sure, if you want wonky liftoff, and stable flight at only one speed. It could work but probably wouldn’t be very much fun.

So that’s how not to do it. Here’s what a stable airship’s vectors should look like: 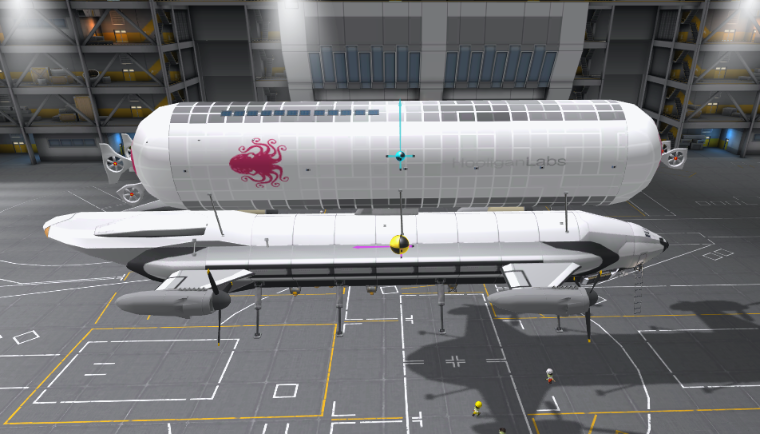 Set up action groups for braking

The easiest way to stop an airship is to cut thrust then reverse-thrust until you’ve come to a standstill, drop an anchor and descend slowly. This is best achieved with reversible propulsion devices from the Firespitter mod — the FS1LEG Lancaster is a favourite for large airships.

I tend to assign thrust reversing to the “Brake” action group, as it’s familiar and as the advantage of being temporarily enabled as well as toggleable — very handy for making small adjustments with a tap of the “b” key. 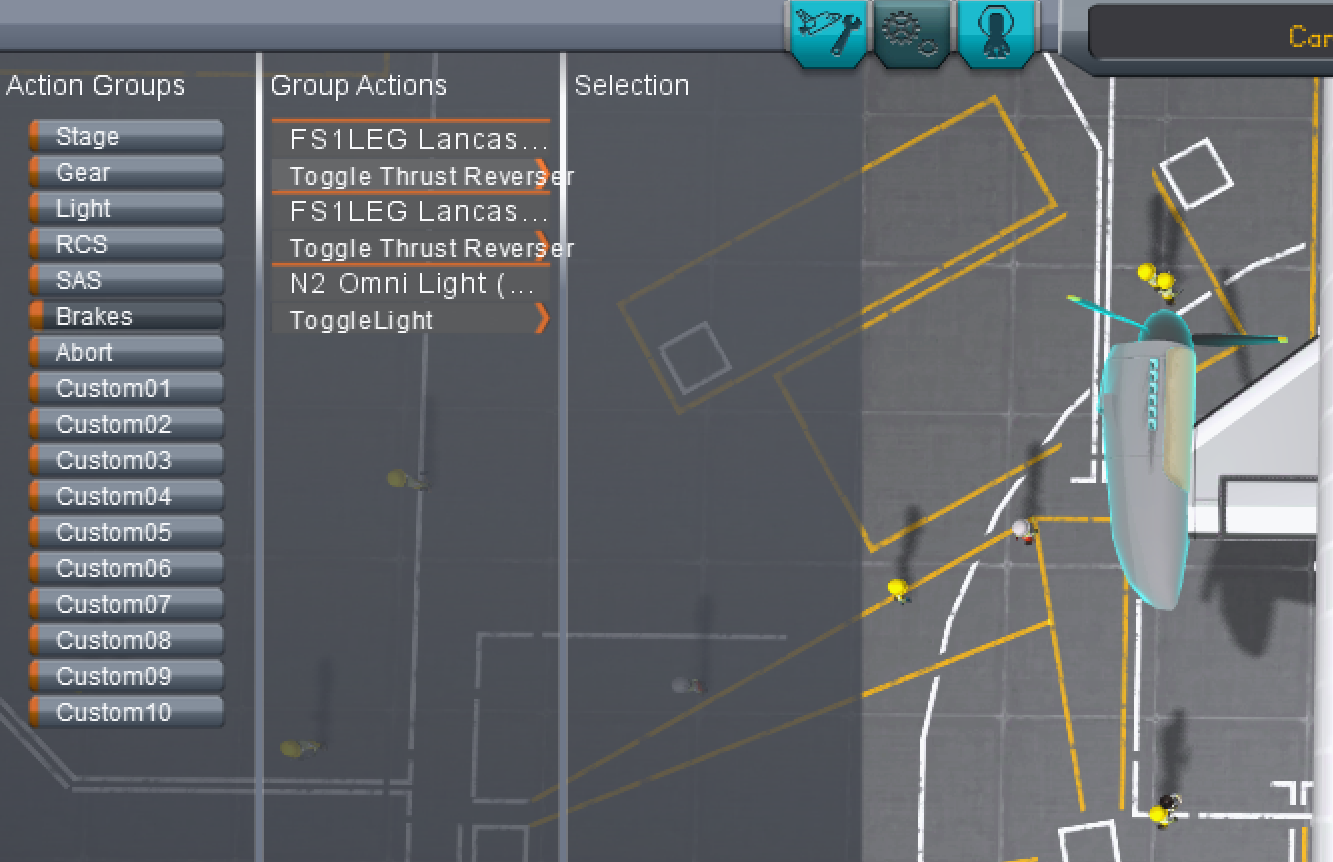 I’ve experienced issues where, after setting up this action group, subsequent re-positioning of the engines causes one side to not correctly reverse, even though it looks fine. Watch out for this!

The nice reversible engines don’t tend to provide much in the way of directional control, but helicopter fenestrons (again from Firespitter) work perfectly. The trick is to increase their thrust manually by right clicking in flight (regrettably this can’t be done in the SPH) until they reach whatever value seems suitable — for the large airship shown above, two fenestrons (correctly aligned! watch those arrows and don’t trust symmetry mode) at thrust level 16 (4 clicks) can turn it quite speedily. 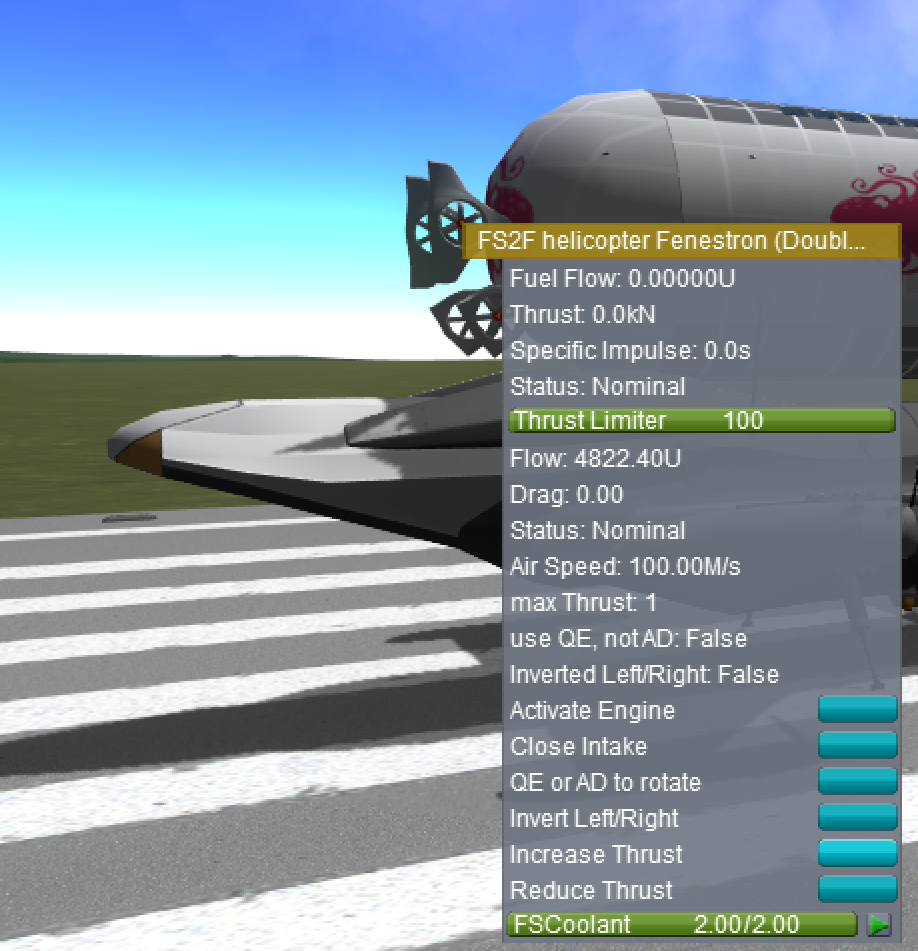 Broadly speaking, there are two types of envelopes: deployable and rigid. They are exactly what they sounds like; deployable ones collapse in to small containers whereas rigid ones stay as they are all the time.

I’ve not had much success getting the standard Airship Envelope, or it’s Hecto/Octo counterparts to work — they never seem to want to attach to anything correctly, or have very much lift for their size.

The Death Star model envelope is excellent for large airships, the K101 and Ray parachute are good for smaller ones, and the probe, Cirrus and Una models good for small balloons. Dodec envelopes are an interesting idea which I’ve had no real need for yet.

Have fun with cargo and KAS

Congratulations, you have a stable craft capable of hovering at any in-atmosphere altitude, lifting enormous weights, landing anywhere it can fit and traveling speedily around Kerbin using almost no fuel — have some fun with it! Take advantage of those huge HL-model cargo bays B9 Aerospace gives you, fill it with kerbals, rovers, smaller aircraft and KAS equipment, add winches and grappling hooks, launch helicopters/rockets/planes/more airships from your airship, more airships from those airships, and so on.

My next project? Getting my head round HL Submarines and building a sub/airship hybrid, then maybe trying to launch it to Laythe.

P.S. craft file for the airship shown in this guide