On the 14th September 1950, the cargo plane “Geysir” crashed into Iceland’s largest glacier, Vatnajökull (vat-na-yer-kutl, no, not the one which stopped all the planes in 2010). Operated by Loftleiðir, which went on to become Flugleiðir and then the present-day Icelandair, this aircraft was flying from Luxembourg to Reykjavík for a refuelling stop before flying to its final destination.

One hour before the plane should have landed at Reykjavík, all contact with it was lost. Initially, emergency services believed that it had crashed into the sea, and search operations yielded nothing. After six days on the glacier, the crew of 6 managed to make radio contact with Reykjavík, and all were successfully rescued. 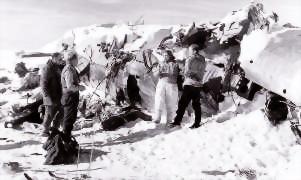 The following summer, salvage parties were sent to see what was left of the plane and its rather unusual cargo. A number of dogs had been on the plane, but they had either perished or been shot on the glacier due to the impossibility of rescuing them. In addition to this, the plane carried a number of antiques, including a French 19th century luteback hurdy gurdy.

The details of exactly what happened to the instrument during and after the salvage expedition are somewhat hazy, but evidence seems to point to one of the salvagers seeing the instrument and, not knowing exactly what it was, thinking it looked nice and taking it home. Somehow, over the next few years, it ended up in the basement of RÚV, the Icelandic national broadcasting organisation, where it was discovered many years later by a tonmeister named Bjarni Rúnar Bjarnasson.

Bjarni realised immediately that he had found something interesting, and proceeded to research the instrument, to find out who could restore it back to working condition, it having being quite badly damaged. RÚV ended up sending the instrument off to Boudet et Fils, who did a thorough and excellent restoration. Repaired, the instrument was sent back to Iceland.

Unfortunately, on arriving, the differences in climate between France and Iceland caused the instrument’s traditional-style solid wooden wheel to warp. As any hurdy gurdy player knows (often through painful experience), a wheel which strays even less than a single millimetre from a perfect circle quickly becomes unplayable. Without any hurdy gurdy builders in Iceland able to fix this issue, the newly restored but unplayable instrument was put in the care of classical musician and medieval-style hurdy gurdy player Örn Magnusson.

I was lucky enough to meet Örn at Vaka 2015 where he was performing and teaching as part of the excellent Icelandic early music group Spilmenn Ríkínís. Discussion quickly turned to the “Vatnajökull hurdy gurdy”, which I had heard rumours about from friends whenever it was mentioned on the radio or the news. We agreed to meet when back in Reykjavík. 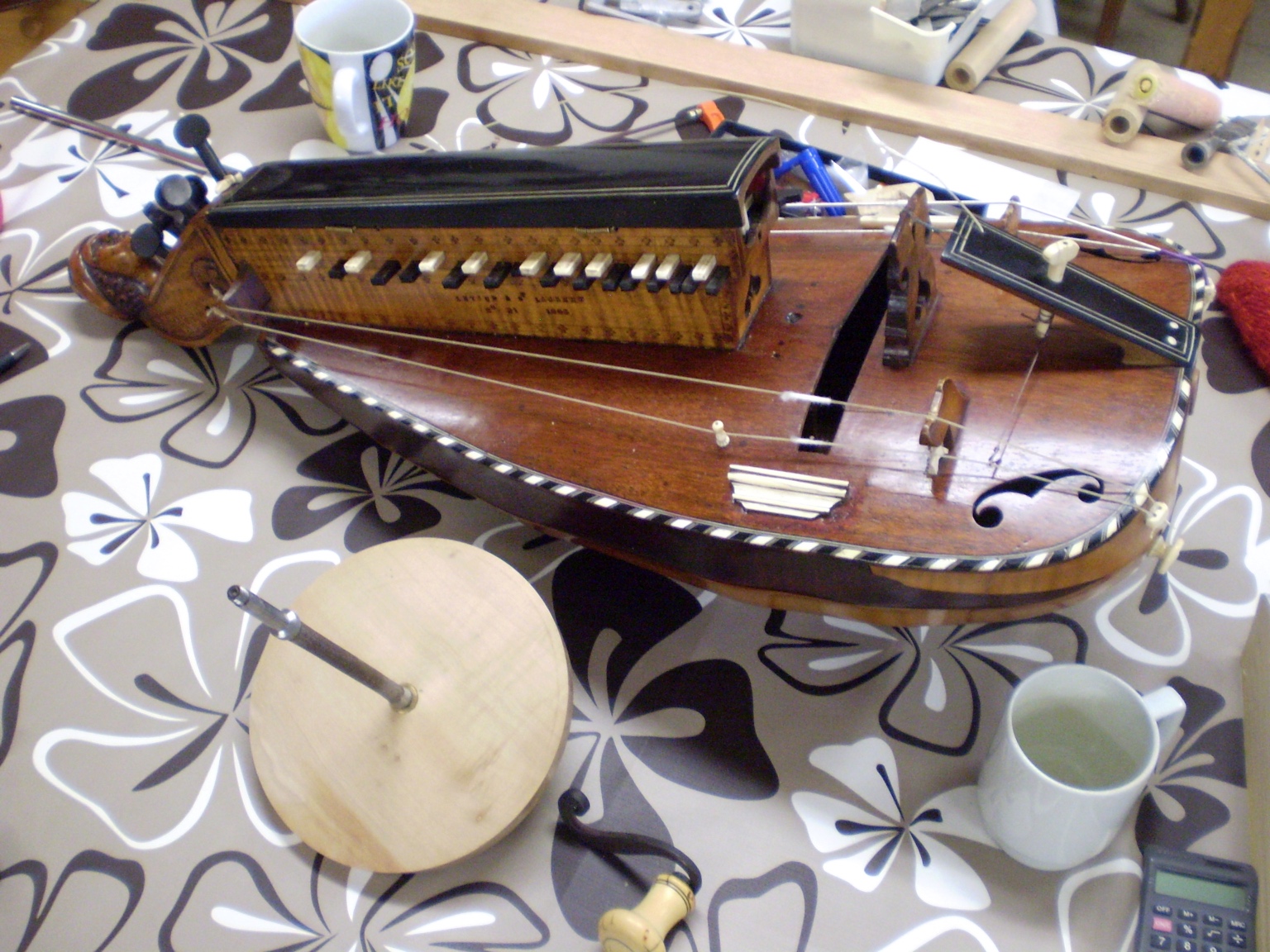 Looking at the instrument for the first time, I quickly determined that the wheel was too warped to correct with only a chisel, and would require re-turning. With less than a week to go before I left Iceland, Örn called up a friend who owned a woodworking lathe; we drove over and reset the wheel. Having done that, only minor setup work was required before the instrument was playing beautifully, a tribute to the original maker and to Boudet’s masterful restoration.

The Vatnajökull hurdy gurdy is an interesting instrument from the Icelandic crash story alone, but is equally fascinating (and somewhat mysterious) as an instrument and historical object. Finding my knowledge on early French gurdies embarrassingly lacking, I phoned up Chris Allen and Sabina Kormylo, who responded with helpful insights and interior decoration advice in equal measure. 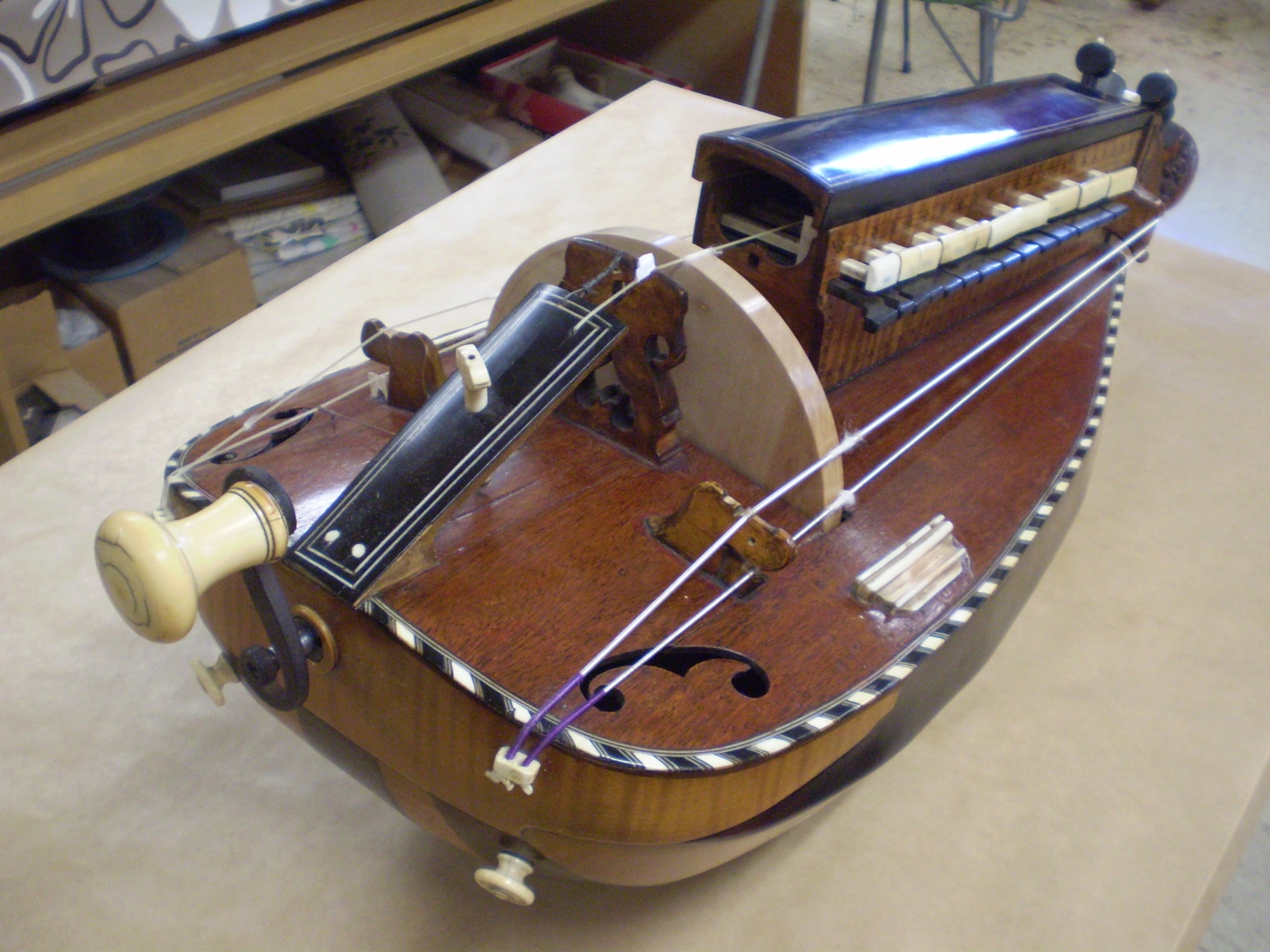 The instrument itself appears to be a 17th century French style luteback, most probably a copy of an instrument by Louvet. The soundboard is mahogany, the body and most of the structural work maple. The lower row of keys are ebony, and the upper row bone. The knob is also of bone or ivory. It is strung in C/G, which is consistent with the small size, mahogany soundboard and single chanter.

It sounds lovely and is a lot of fun to play — all of the keys move without sticking, the chien is crisp and responsive, the drones clear but not so loud they overpower the single chanter. RÚV made a brief recording of me talking about and playing the instrument, but I never got a copy of it and don’t think it’s on the web anywhere — if I find it I will add it here. 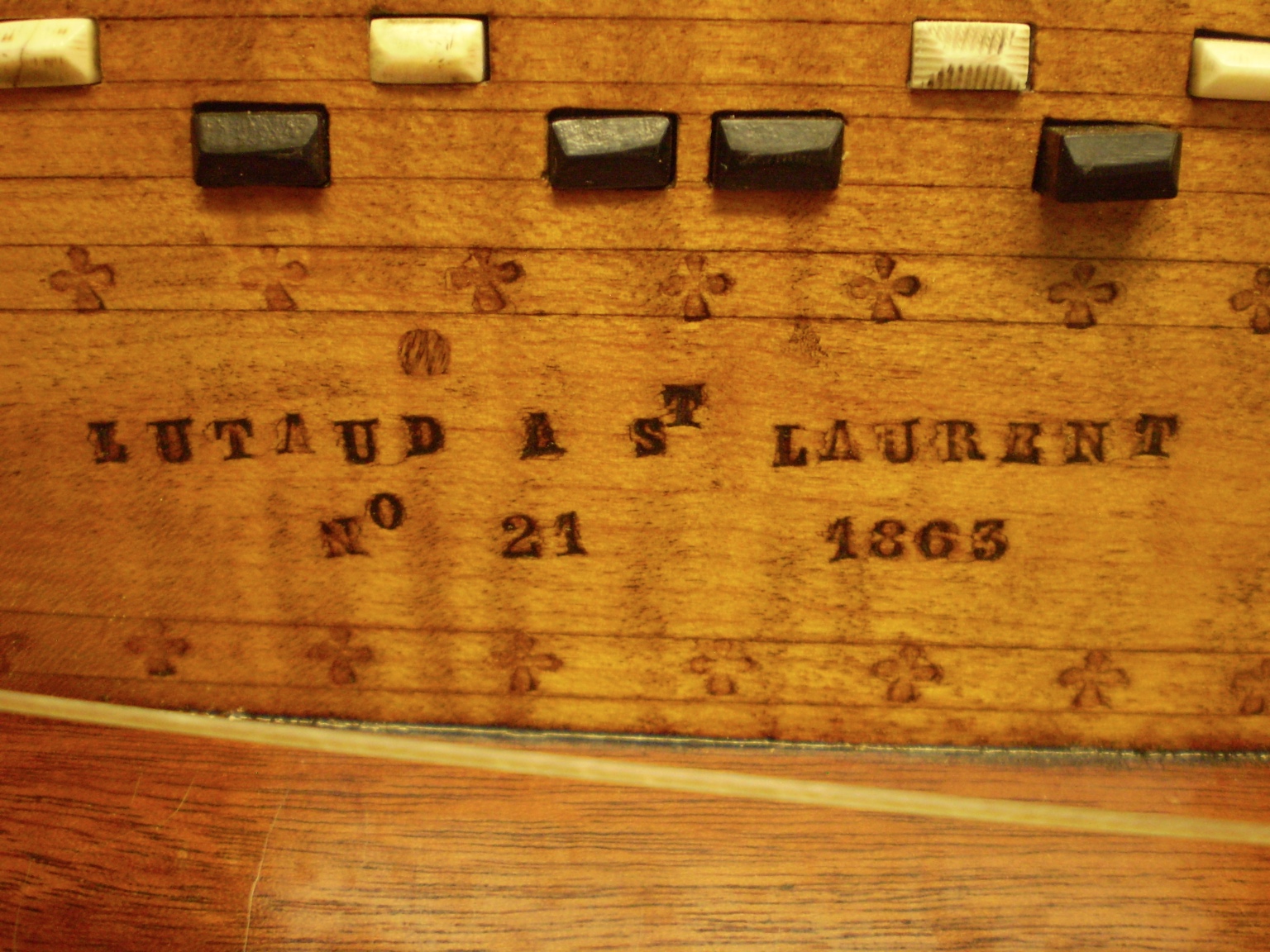 The instrument is decorated plainly but quite tastefully, with banded “barberpole” and BWBW purfling. The head is somewhat crudely carved as a man wearing a feathered hat. The finish bears traces of red carmine paint, which do not appear to be original but rather applied then mostly removed after the instrument was built. 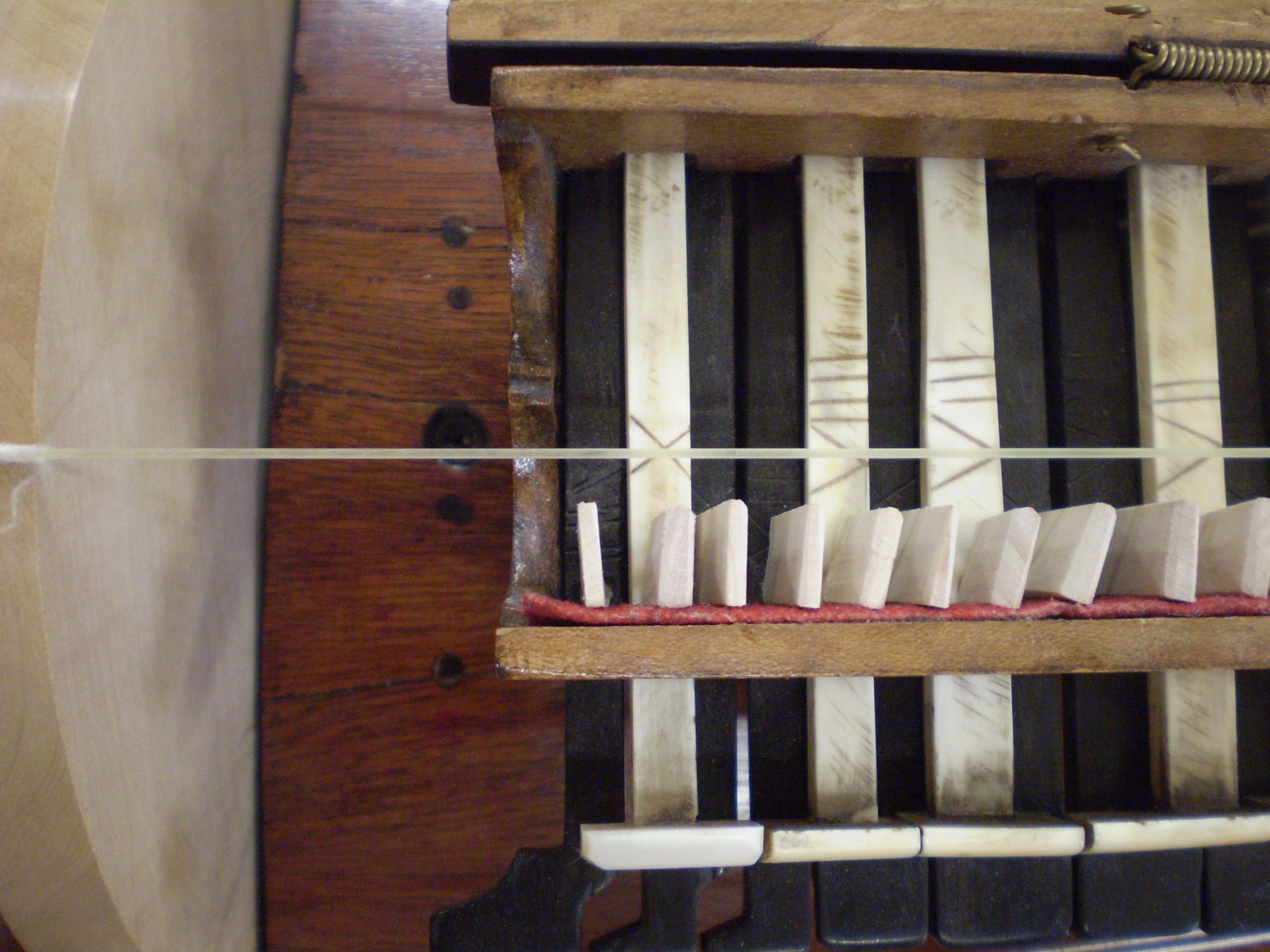 I wasn’t sure what to make of this, never having seen it on pre-20th century French instruments. Chris Allen offered the following wisdom:

The string length is a bit of a mystery, but if you have ever tried to calculate key head spacing, reconciling them to the key shafts which could be of this width or that and tangent locations, you find yourself spinning several plates, and it will surely occur to you that you could have your cake and eat it, were the string longer. The longer string certainly buys you space for a wider key at the top end and gets round the missing key if you perceive that as a problem. But it makes the stretch a bit more at the bottom end - where we spend much of our time.

Gurdy makers are inventors as you know. It is a wonderful playground for us to practise our ingenuity and the test of our success is whether a great player could make (good) use of the instrument or would find our innovation to be a nuisance that interrupts his fluency.

I also posted some photos on the Hurdy Gurdy Players Facebook group and had some interesting responses. Everyone seems to agree that the instrument is a copy of a Louvet, but the maker, Lutaud, remains a mystery. Chris Tandy found a reference to a “Lutaud” who made bagpipes, but this rather spurious lead is as far as the trail has gone so far.

So, without further information about Lutaud or this particular instrument, there could be any number of theories as to how this instrument came about. Perhaps it was made by a bagpipe maker who wanted to be able to play musette tunes which required both an F and F# in the upper octave. Perhaps a customer requested a gurdy which could do that. Or perhaps it was simply another case of a hurdy gurdy maker experimenting, trying to make better instruments.

It was a privilege to work on, learn about, and tell the story of the Vatnajökull Lutaud, and there’s nothing I would rather have spent my last week in Iceland doing. But as you have no doubt noticed, the story is not complete. If you know anything about this gurdy, Lutaud, or old French instruments with extra keys and non-standard scale lengths, please get in contact! You can email me at barnaby@waterpigs.co.uk.