Menu ⇓
Documenting the idea, inspiration, purpose, background and initial steps toward a device for measuring the speed of a hurdy gurdy wheel.

The wheel is the central part of a hurdy gurdy. This never ending bow at the heart of every instrument transfers energy from the player’s hand to the strings, and in doing so provides the instrument’s greatest asset as well as it’s greatest limitation — a constant drone, and lack of expressive range, respectively.

The wheel also provides a convenient abstraction for teaching, especially of buzzing rhythms. It’s divided up into quarters or sixths, with each point numbered, and students are instructed to buzz at some points and not others, with each teacher visualising the wheel, and the positions of buzzes around it, in a different way. As Hurdy Gurdy players we lack a vocabulary for talking in detail about trompette rhythms, and it’s often tricky for students to compare their own buzzing to other people’s.

The obvious solution is simply to measure the speed of the wheel over time, and show visually exactly what is happening. If visualised, such traces could then be examined, exchanged, compared against and so on. Additionally, a stream of speed and potentially even position and/or direction data could be used to control all sorts of things (for example musical or lighting effects), and would make an excellent addition to an internet-connected musical instrument.

The idea of attaching some sort of rotary encoder to a gurdy wheel occurred to me after discussing some of these problems with some of my teachers including Chris Allen and Steve Tyler, both of whom expressed a desire to visualise wheel speed for interest and teaching purposes. The idea lay festering for a year or so whilst I started making gurdies, but after discussing it with even more people at the 2014 Halsway Gurdy Weekend, building several well-performing gurdies and gaining more hardware and embedded software creation experience I’m finally in a good position to implement it.

There are three choices for measuring the speed of the wheel: an optical rotary encoder made from alternating light/dark patterns on the wheel surface and a light sensor, a magnetic encoder made from magnets or strips of ferrous metal in the wheel, or optical via a separate wheel making direct contact with the gurdy wheel.

Magnets are too intravenous, and whilst optical via a direct contact wheel would make the device easier to port across instruments, an optical encoder made up of stickers on the wheel surface is the easiest to build and measure.

I bought a bunch of white stickers, and stuck 52 of them around the wheel’s surface, approximately 5mm apart. Creating a simple photodiode measurement circuit feeding into a PIC microcontroller’s built-in comparator results in a sensor which can easily be calibrated by adjusting a potentiometer. Using an ambient-light-filtered Vishay reflective optosensor mounted close to the wheel surface reduces the chance that ambient lighting conditions will affect measurement. 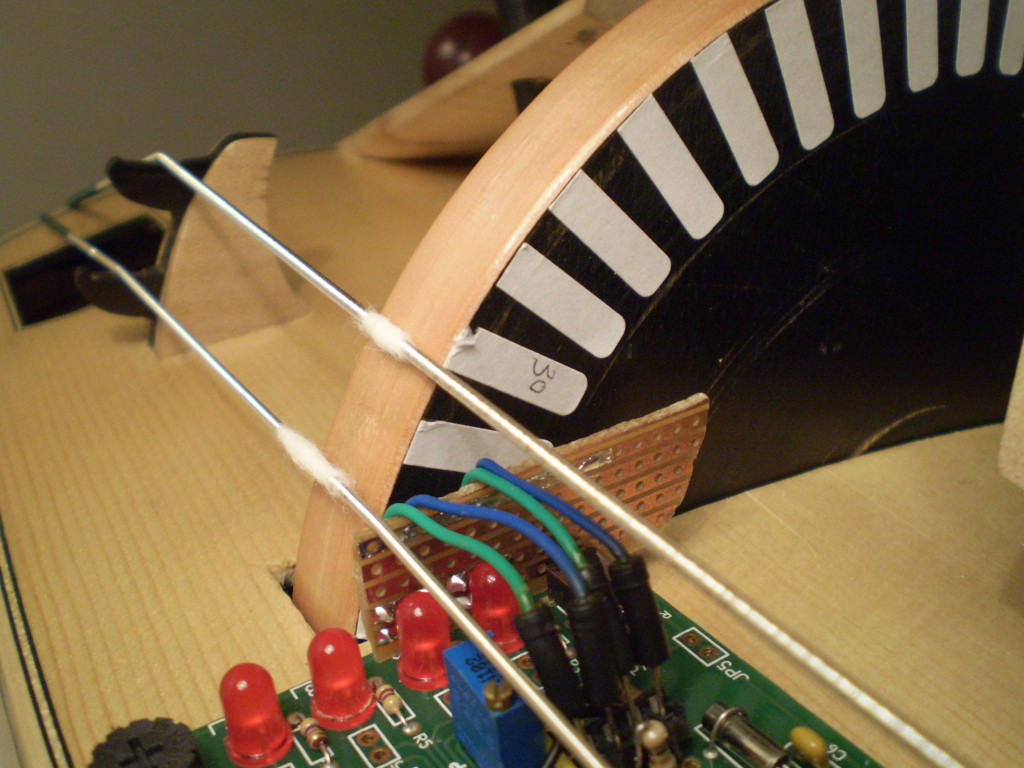 The structure of the finished system will probably be made of up a PIC connected to the optical sensor which times how long it takes in between each pulse from the sensor, calculating a moving average of wheel speed, and a Raspberry Pi on board periodically (hundreds of times a second) requesting the current wheel speed, which will be broadcast to various other services on the Pi for logging, visualisation, control and so on.

Now the initial calculations for the encoder-measuring program have been done, the next step is to build and test it. Watch this space!